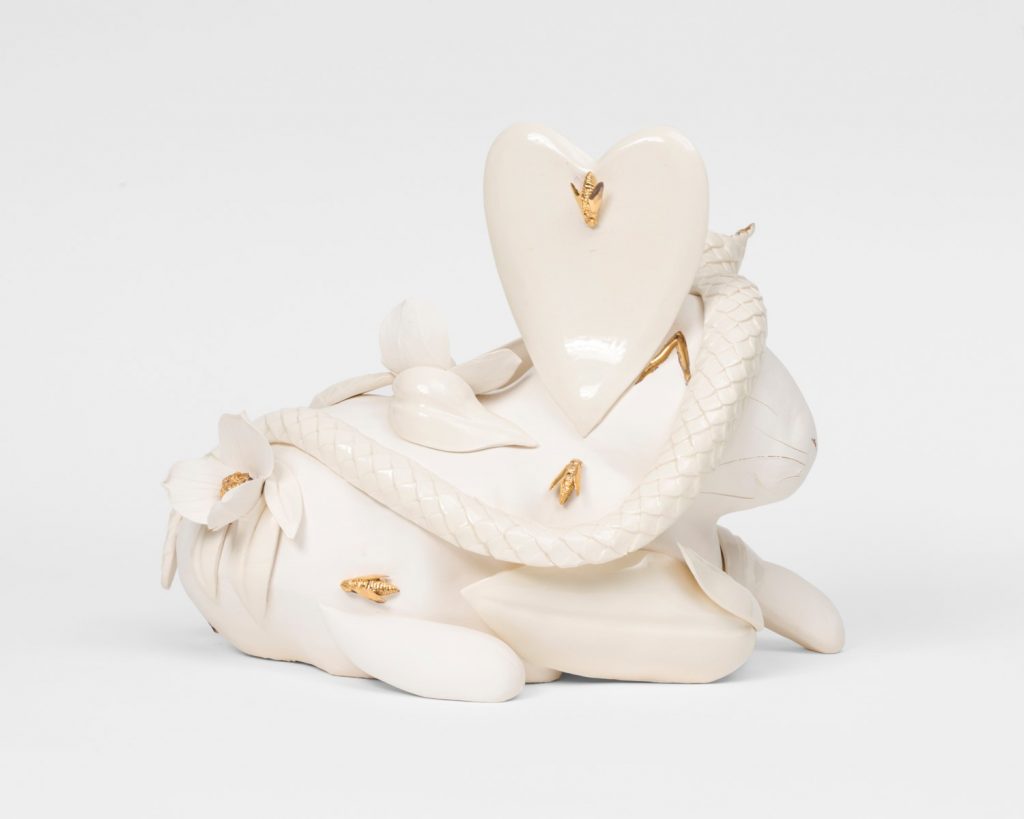 In 2011, as a junior at Swarthmore College studying studio art, Alex Anderson took a semester abroad to study at the Jingdezhen Ceramic Institute. Jingdezhen, located in Jiangxi Province in southeastern China, is, as described by Ceramic Artist and Author Edmund de Waal in his book, The White Road, “the city of porcelain, the fabled Ur where it all starts … where the purest objects in the world are made. It is a city of skills and knowledge, of industrial sophistication beyond anything attempted elsewhere.” It was here, in Jingdezhen, which Alex refers to as  “a creative space where there was so much knowledge of the medium,” where his work in the studio blossomed into the realization that the rest of his life would be dedicated to the world of ceramics.

In 2015, Alex received a Fulbright Scholarship to focus his interest on more contemporary concepts at the China Academy of Art in Hangzhou. In 2018 he received his MFA in Ceramics from UCLA. Now a working artist, he is currently represented by Gavlak Gallery in Los Angeles and Palm Beach.

Alex believes the path to Jingdezhen and beyond began at Rainier Scholars.  “The staff and teachers were there to help me find my own path to success, and to help reveal the most important thing: my potential.”  Potential yes, but also hard work. Asked what specifics he remembered from twenty years ago, he chuckles and says, “when I think about that period overall, I was just really tired.” Tired, but also clearly motivated, especially by Founder Bob Hurlbut’s morning inspirational talks replete with the Bob’isms scholars have all grown to love and appreciate. “Almost done, is not done.” “You get out what you put in.” “Don’t wish for it, work for it.”  For Alex, these were stepping stones to success. He learned for himself that once you acquire the necessary skills, you become empowered to do whatever you want.

Alex’s passion for art motivated him to finish his regular homework at The Lakeside School as soon as classes ended so he could spend as much time as possible in the art studio. He has remained committed to his craft for 15 years and is now reaping the rewards.  A review of his July 2018 solo exhibit at the Gavlak Gallery in L.A. noted, “his dexterity in the medium with a confluence of baroque imagery and compositions, Japanese pop art references, and current contemporary fashion and design trends in order to probe the depths of reality, illusion and identity.”

For Alex, art is also a means of community engagement.   He teaches ceramics to high school students at the Geffen Academy at UCLA, where he loves working with, and pushing the students to do their best. He likes teaching and says it is a window into the next generation and an important way to “keep ceramics alive by introducing students to new ideas at an early stage and advocating for the craft to be part of the contemporary art canon.”

Alex credits Rainier Scholars with exposing him to the Humanities — literature, philosophy, history, politics – which provided him with ideas and concepts he still works with every day. “These subjects impact both the way I understand the world today and the art I make,” he says. “They let me participate in society in a way that I wouldn’t have been able to without that foundation.  I am very grateful for that.”

When asked if he channeled any of his Rainier Scholars teachers in his work at Geffen, he paused for a moment and then responded, “I channel excellence.” Spoken like a true Rainier Scholar, who internalized the core values of excellence, perseverance, integrity and courage at age 11 and shares them now with his students at the Geffen Academy, reminding them daily to “rise to the standards you create for yourself.”