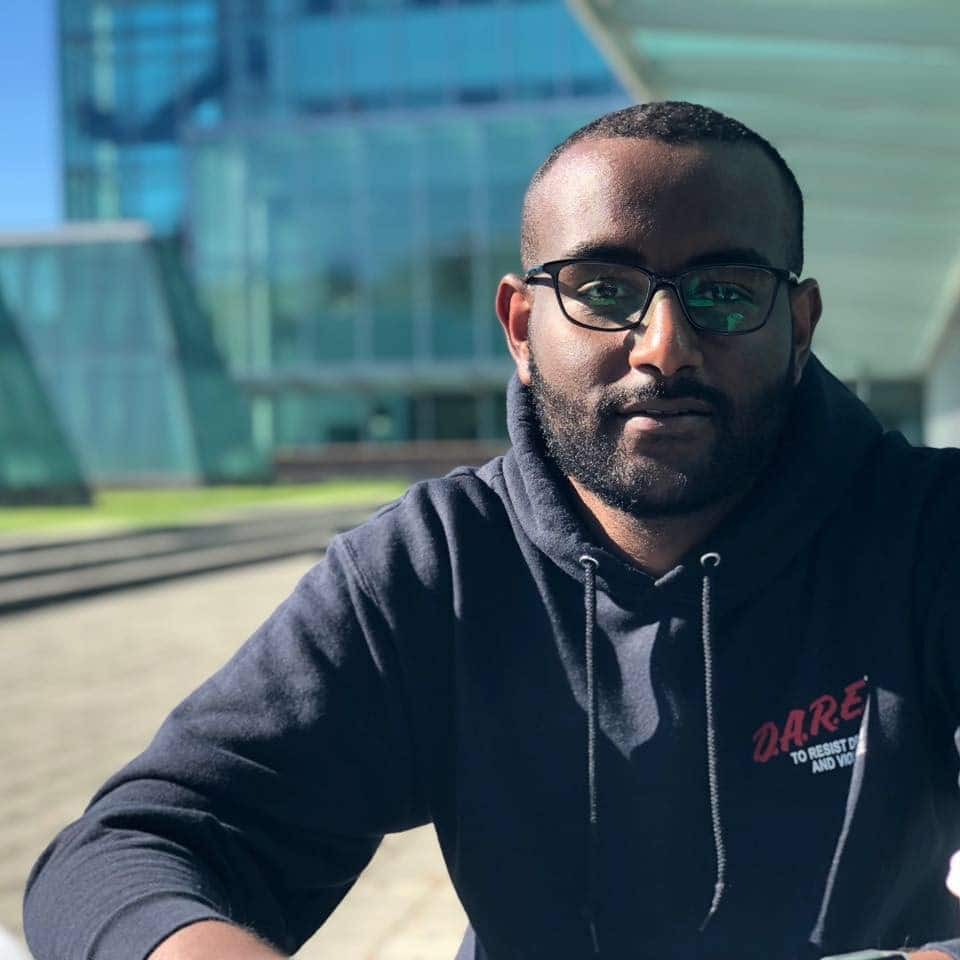 For people of a certain age, there was an act on the Ed Sullivan Show circa 1969 that was always a show- stopper, at least it was for me as a child of thirteen. It was Erich Brenn and his plate-spinning extravaganza. Cohort 6 Rainier Scholar Adam Iyob has never seen the Erich Brenn skit, or any spinning plate performance for that matter, but acknowledges his approach to life has been akin to “having a lot of spinning plates in the air!”  Seeing this common metaphor come alive in Brenn’s performance gives an indication not only of Adam’s skill and confidence, but also his sense of fearlessness. He is not afraid to fail. He knows plates will be broken, but so many more will continue to spin.

Adam’s personal plate spinning began early and was taken to a new level when he started the Academic Enrichment Program (AEP) at Rainier Scholars. As he says, “I was amazed at the amount of work we had to do. It was abnormal!”  At the same time, he believes the challenge to keep up with the workload informs the way he works today. “There was a kind of brutal honesty the teachers and staff had with us. You knew they were going to tell you when you were messing up, but at the same time, they were the first ones to help you pick yourself back up and get back on track.”

Such contact was, according to Adam, like being treated as an adult, as a full-fledged person. Not a day went by without a teacher or advisor asking him how he was doing. Just as, if not more importantly, in return he was expected to tell them and verbalize the feelings of frustration, fear, and insecurity, as well as the joy and satisfaction he was feeling – emotions that can be hard for a young person to share. Adam says, “Those interchanges gave me a level of emotional intelligence and confidence to connect with people, regardless of where I was. It was a sense of fearlessness that opens up opportunities.” And so, the plates, slowly and one at a time, started spinning.

Adam Iyob, son of Eritrean immigrants and raised by a single mother, dreamed of being a firefighter as a child. The attraction to big red trucks with sirens and lights was of course there, but there was something he felt about being out in the world, helping people. As an undergraduate at Emory University in Atlanta, Adam chose to become an Emergency Medical Technician for three years – one year on campus, and two in DeKalb County, Georgia’s fourth largest and most diverse county. Of his experience as an EMT he says, “It is one of the few jobs where someone asks for help, you show up and figure out how to help them – right there and then.”

As a latchkey kid growing up, Adam would come home, turn on the TV and watch CNN. He felt an early attraction to politics and the pull of big ideas. At Rainier Scholars he thrived in the high school Leadership Development retreats,  where topics such as equity in education, systemic discrimination and social contracts were discussed, and as a high school junior he attended the highly selective School for Ethics and Global Leadership in Washington, DC.

After graduating from Emory University with a BA in International Studies and a minor in Economics, Adam’s next step was up in the air. He was not planning to go to graduate school, but that changed when a friend of his said he was going. Then, once Adam found out he could take the LSAT entrance exam at no cost, he said, “why not,” and dove in.  He is now a second-year law student at University of Washington and is working in the legal department at Avalara, a tax compliance company in Seattle. Adam will graduate in June 2021 and plans to practice transactional law in Seattle and eventually transition into healthcare policy.

These are just a few of the opportunities Adam has taken advantage of. There are many others, but they seem to follow the same pattern. The more challenges taken earlier –and the more failures learned from– the closer his path has hewn to the contour of his personality and passion. He would be hard-pressed to say exactly how he got on track to be a corporate attorney. It would also be too soon to say exactly how he plans to pursue his desire to bring more equity and social justice into the healthcare system. But he believes he will, in time.

In the interim, in the all too rare moments of relaxation, he confesses to moments of self-doubt. Most recently, at a Rainier Scholars Alumni gathering, where adults like him met with the newest cohort of students, he found himself looking at the kids looking at him look at them and he wondered, why am I here? What purpose am I serving? A plate was wobbling. Then, in a moment of emotional clarity, he realized that they, these rising fifth graders, were there as much for him, as he was for them. For he saw the hope in their eyes and realized, “this is where it all begins, and I can be part of the foundation they stand on. I can play a role in building a stronger community.”