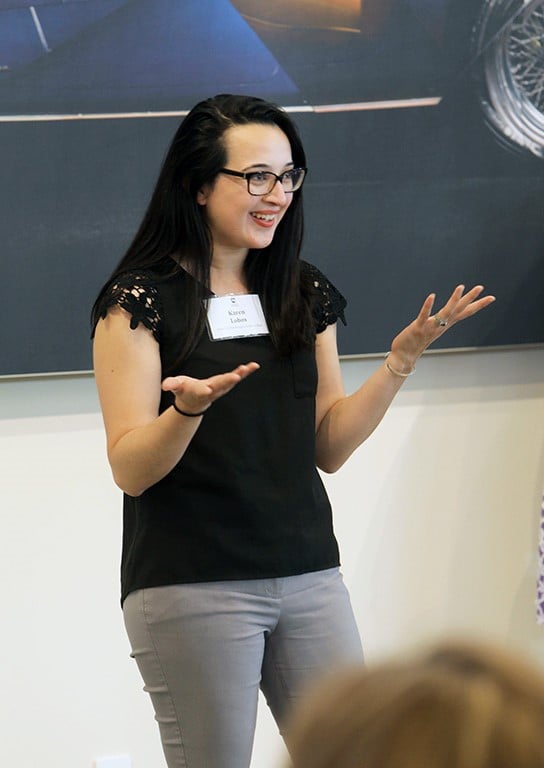 Karen Lobos’ commitment to social and economic justice lies deep in her DNA.  It goes back to her grandparents and great-grandparents, who as farmers living and working in northern Mexico in the early 1900s, fought for their land rights. For generations before them most of the land in Mexico was held by a few oligarchs, and even after the Mexican Land Reform Act, wealthy landowners resisted the mandated redistribution. The struggle was contentious and sometimes violent. Karen’s grandfather is still proudly farming the land he fought for. However, with not enough land to go around, the next generation had to find another way to provide for themselves. Karen’s parents made the difficult decision to emigrate to Southern California in the 1980’s. Jose Castro Lopez and Gisela Castro Ayala became farm workers in the Coachella Valley, where Karen’s older brother, Oscar was born.

One summer her parents traveled north from the arid lands of Southern California to the Puget Sound to visit a relative. They were overwhelmed by the lush green land and the water surrounding it, and so the seeds of Karen’s life in Seattle were planted. Her parents moved north soon after to what is now White Center. A decade later Karen Lobos would show her 5th grade teachers, Ms. Rush and Mr. Silver, a piece of mail her parents had received from a new educational program called Rainier Scholars. It was an invitation that would change the trajectory of her life.

Karen remembers feeling excited on the bus that took her and her friends to the summer session of the Academic Enrichment Program, where she felt she was in her element.  “I knew I was going to be driven to be my best, personally and academically.” For Karen, Rainier Scholars was the place where her mind was further opened to the power of education and her heart to social activism. It is where she came to reflect on her family history as a young woman of color. “I decided to take full advantage of my privilege of being born in the United States and going to schools like Explorer West, The Lakeside School and Scripps College; to have the opportunity to choose how I want to live my life.” She wondered why other low-income people of color didn’t have similar opportunities and support systems.

In high school, Karen wanted to be a lawyer, in order to help people overcome the structural barriers holding them back both educationally and economically. She interned at a couple of law firms, including Miller Nash LLP in Seattle, but it was a freshman year class on the politics of race and power at Scripps that revealed to Karen her true passion for community organizing. She had not been exposed to community organizing before so to learn directly from peoples’ experiences and the issues they faced was transformative.  Karen says to be able to “bring those conversations and issues to places of power where decisions are being made,” felt like a process she wanted to be part of, an opportunity to create change in the world.

The next four years of Karen’s resume read like a roadmap for social justice action: Los Angeles Bus Riders Union, Workers for Justice, Casa Latina, Koreatown Immigrant Workers Alliance, and the American Federation of State, County and Municipal Employees (AFSCME) in Baltimore, Maryland. Through these experiences, she organized alongside low-income people of color, immigrants, and domestic workers to advocate on issues ranging from equitable public transportation to fair wages. In 2014, during her senior year at Scripps, she was selected as a Napier Fellow, an award given to just two graduating seniors from the five Claremont Colleges who demonstrate outstanding leadership in social justice, peace and environmental sustainability. She also won a  $20,000 Davis Projects for Peace prize for a food justice project she designed to found the Roots of Change Community Garden and Youth Summer Program in Pasco, Washington, a small city in eastern Washington with a rich farming history so very similar to that of her heritage.

When the Roots of Change summer program ended, Karen chose to keep working with students and in community engagement as the student intervention supervisor in the local high school. Her job was to help juniors and seniors make up credits they had lost by failing classes in their freshman and sophomore years. After one year of work she calls “heartbreaking,” she realized this intervention came too late for these students. Just about all of them chose to forgo high school graduation. It was a time of self-doubt for Karen. She wondered where and how she could be of service.

It was during that time that Sarah Smith, executive director of Rainier Scholars, encouraged her to come back home to White Center and apply for a position at Rainier Prep, a newly formed public charter middle school where earlier intervention would be possible. Karen got the job at Rainier Prep in 2015 and in the five years she has been there she has held the positions of Community Relations Manager, Director of Engagement and now, Director of Operations. Karen says working at Rainier Prep is deeply satisfying on many levels. “The families I work with remind me of my parents. I help them break down language barriers and structural inequities so that they can understand their daughter or son’s academic journey. I support them as Rainier Scholars supported me.”

Karen Lobos feels she has come full circle: from a fifth grader holding an invitation to a Rainier Scholars Open House 18 years ago to a leader ensuring current fifth graders have access to opportunities she had. Where she was once just one student with a dream, she now helps hundreds of students achieve their dreams.