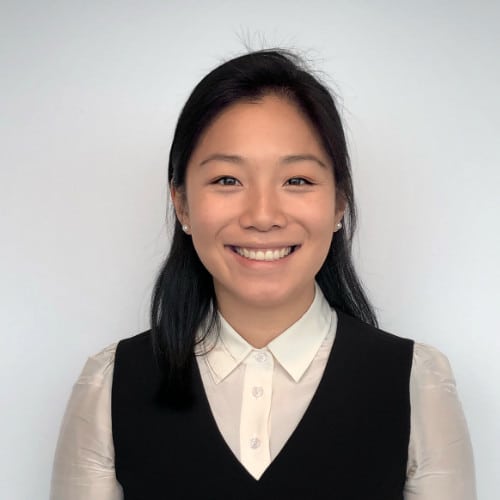 There was a seminal moment early on in Sallie Lau’s time with Rainier Scholars. It was during the Academic Enrichment Phase of the program and her English Literature instructor, Ms, Mikolasy, was teaching the Jane Schaffer Paragraph Structure (a five-sentence paragraph utilizing topic sentence, concrete details, commentary and conclusion). There is a simple and an advanced version of this model, and Ms. Mikolasy had given the class the option of choosing one or the other. Sallie thought, “I’m not that smart, so I am going to do the easy version.” As she was about to start her work, Ms. Mikolasy leaned over her shoulder and said, “you should be doing the advanced version – I think you can do it!”  Sallie thought about it for a moment, and concluded she had nothing to lose by trying. As she thinks about it today, she says that moment, that opportunity “might well have been the genesis of my ethos of taking on challenges and not being afraid of failure.”

As the years progressed, Sallie took on other bigger, more life-changing challenges. During an internship with the League of Education Voters the summer after her junior year at Garfield High School, she had the opportunity to meet an alumnus of Williams College who felt Williams was a perfect fit for her. Located in Massachusetts, Williams had not been on her college radar. However, through a program called Windows on Williams that brings low-income students of color to the campus, Sallie was able to visit the school. She was impressed, but the distance from home, rural setting and its reputation for academic rigor made her uneasy. She knew she should apply, and did, but dreaded getting in because she knew she would go. She was accepted and says, “it kicked my butt and changed my life.”

After her freshman year at Williams, she got another internship, this time at Starbucks, where her manager was a graduate of Stanford Business School. They were talking about graduate school programs and he noted how keen business schools were on candidates who had done an undergraduate honors thesis. Sallie thought the idea of doing an honors thesis, normally reserved for the best student in each major, was crazy, until her junior year when, she thought, “OK, why not?” She arranged for a year -long independent study program on the economics of education, got some additional writing help, and wrote the honors thesis for Political Economy majors on Racial Integration Policy in Seattle Public Schools.

Sallie’s willingness to take on challenges runs in the family. Her parents are Hoa, descendants of Chinese settlers who came to Vietnam from the Guangdong province, starting in the eighteenth century. Both emigrated from Vietnam in the late 1970’s after the end of the Vietnam War. Her father escaped by boat and arrived in America when he was 17 years old. Her mother’s father was in the military and arranged for her to be airlifted out of Vietnam. Sallie’s parents met in Seattle, married, started a family and, along with her father’s siblings, opened a grocery store, where Sallie would spend many happy hours.

When she was very young, Sallie would hide in the grocery storeroom with her brother, looking out at the customers. As she got older, she realized a proficiency with math, memorizing prices of the items on the shelf, being able to restock quickly and running the cash register. In elementary school, she would spend eight hours each Saturday and Sunday in the store – a time she remembers fondly. She loved being with her family – aunts, uncles, and cousins all working at the store, but was also intrigued by the customers’ behavior. What were they buying? Why? How did they move around the store? Sallie thinks the time spent in the store “is probably why microeconomics is so interesting to me; thinking about how individuals and small businesses make decisions.”

In addition to these early musings on economic theory, there were also the cultural influences of being raised in a large family. As she says, “I was raised to be humble. To be grateful for the opportunities that come your way. At the same time, being a child in a family in a culture where age is to be respected, I had to learn how get someone to agree with me without throwing a tantrum.” Just as her time in grocery store aisles piqued her interest in economics, her time at the dinner table and at family gatherings pointed her towards studying political science and the powers of persuasion.

We are all shaped by family and the opportunities life provides us. Sallie’s story is no different. Because of a wonderful mix of her parents’ courage and resiliency, the bond of her extended family and the opportunities uncovered through over a decade of Rainier Scholars support, she is on the way to achieving her dreams. Currently she is finishing her first year at the Tuck School of Business at Dartmouth and has been chosen to fill one of the highly selective summer internship positions at Boston Consulting Group, one of the most prestigious consulting firms in the world. It could have been otherwise.

One of Sallie Lau’s favorite books during her time at Rainier Scholars was The House on Mango Street by Sandra Cisneros. The main character in the story, Esperanza, wants desperately to leave home, to leave Mango Street, but towards the end of the book she realizes it is not to escape the barrio, but to make it a better place for those who don’t have the opportunity to leave. Esperanza says, “They will not know I have gone away to come back, For the ones I left behind. For the ones who cannot out.”

Sally relates to Esperanza’s sense of purpose. “This is how I feel. I feel the honor to return to my family, to my community and bring those who were left behind along; to be successful and help create opportunities for others.”