Excellence, On and Off the Pitch — Dawit Workie, Cohort 6 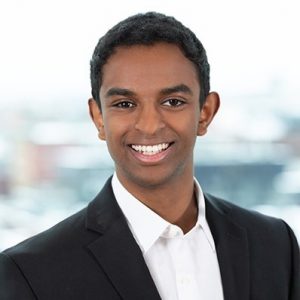 Dawit Workie was a rugby player – a very good rugby player. Both in his senior years at Saint Michael’s University School, a K-12 boarding school in Victoria, British Columbia, and at Dartmouth College in Hanover, New Hampshire, Dawit was voted the teams’ most valuable player. Over four years of Ivy League play at Dartmouth, his teams compiled a record of 32-0, competed consistently on the national stage, and Dawit was a three-time All-Ivy selection and a 2nd Team All-American. He was, of course, also a student during those years – a very good student. At Saint Michael’s, he was on the honor roll all four years, compiling an average grade percentage of 93%. At Dartmouth he graduated with a B.A. with High Honors in the Mathematics and Social Science Program.

To perform at that level requires a certain mindset. It also requires good teammates and coaches, and a supportive family. For Dawit, it begins with his parents, who emigrated from Ethiopia at the height of the war with Eritrea in 1999. They worked professionally, but left everything behind to come to the United States when Dawit was four years old. They settled in North Seattle and began the work of starting over and creating a new life for their children. Instrumental in that process was Rainier Scholars. When the family received an invitation in 2007 for Dawit to apply, it was, according to Dawit, “a no-brainer.” The only problem was, he didn’t get in. He had done well in the application process, but just missed the cut. The good news was he was invited to re-apply the next year. He did, and he got in – an impressive effort on the part of his parents to keep him focused on improving his performance.

After completing the Academic Enrichment Phase (AEP) his parents made another critical decision — they sent him to a boarding school in Canada – Saint Michael’s. At the time Dawit admits, “I was not hanging out with the best crowd and was not challenging myself.” However, because of the work he had done during AEP and with the help of Rainier Scholars, Dawit was able to get a financial aid package from Saint Michael’s that made attending possible. As a 13-year-old away from home, it took some adjusting, but Saint Michael’s was supportive, he made friends, and he discovered rugby – a sport that would change his life. A gifted athlete already, he fell in love with rugby because it combined the best aspects of many sports. What’s more, he loved “the camaraderie, the tight knit nature of the players and the continuous pace of the game and the teamwork required in a match.”

Rugby and Saint Michael’s opened up the world for Dawit. One of the strengths of the school was its diverse student population. Dawit had teammates and friends from Africa, Asia, Europe and, of course, Canada and the United States. What’s more, playing rugby at an elite level at Saint Michael’s and on select club teams during the summers, gave Dawit the opportunity to compete in tournaments throughout the Americas. The travel not only improved his match play, but also his understanding of other cultures.

When the time came to look at colleges, both Rainier Scholars and Saint Michael’s were very helpful in reviewing his options, and preparing him for the testing and interviewing, but for Dawit, again, the decision was, “a no- brainer.” In his junior year of high school, the Dartmouth rugby team had just won the Collegiate Rugby Championship, beating the University of Arizona 24-5. He made Dartmouth his top choice, and this time he was accepted the first time around.

Dawit and Dartmouth did not win another national championship during his tenure there, but they did all right. Dartmouth won the Ivy League title all four years and they were competitive each year for the national title. He also continued touring and participating in training camps throughout the offseason. But as his college career was coming to an end, he had some choices to make. He treasured his time competing, but he also loved his studies. He received a $1,000 grant for undergraduate research, had also completed a satisfying summer internship at BlackRock Investments in San Francisco and written a senior thesis in Neuroscience on The Effects of Anticipated Regret on Decision-Making. As much as he loved the sport, he also realized a professional rugby career was probably a long shot. What’s more, at 5’ 9” and 155 pounds (on the slight side for the pros), it was also probably not the wisest choice from a physical point of view. Instead, he chose to enter the financial services world, a decision he does not regret.

Dawit is currently an Associate at Battery Ventures in Boston, where his primary responsibilities are financial analyses and sourcing of late-stage private software companies. What he enjoys most about the work is the constant learning involved in evaluating various businesses to understand what separates one company from another. His work harkens back to his competitive days on the field of play and even further back to Rainier Scholars, where he was constantly challenged to up his game. He remembers the oratories – a requirement of all scholars to memorize passages from books and present them in front of an audience. It was an exercise that took him way out of his comfort zone. Then there were the literature and science teachers who convinced him to look beyond the superficial answers and dig deeper for more nuanced, satisfying answers – and defend his position taken.

Dawit believes these fundamental skills helped him get to where he is today. “Rainier Scholars puts you in a mindset that is monumental in terms of personal and academic development. It opens doors that might not necessarily have been there and gives you the tools to capitalize on those opportunities Like  any good rugby fly-half, **Dawit says his skills on the rugby pitch were not so much about his physicality of play but rather “on being creative and smart on the field – finding ways to make my teammates more successful.”

In classrooms and competitions, and even before he knew it, Dawit was learning how to be successful on, and off, the pitch.

**A fly-half is the heartbeat of the side and arguably the most influential player on the pitch. Almost every attack will go through the fly-half, who also has the responsibility of deciding when to pass the ball out to the center and when to kick for position.

This is a pivotal moment in the fight for racial equity and a more just society.

Our next Executive Director will guide an organization with a national reputation for excellence through an exciting period of expansion, impacting the lives of students, families, and communities for years to come.