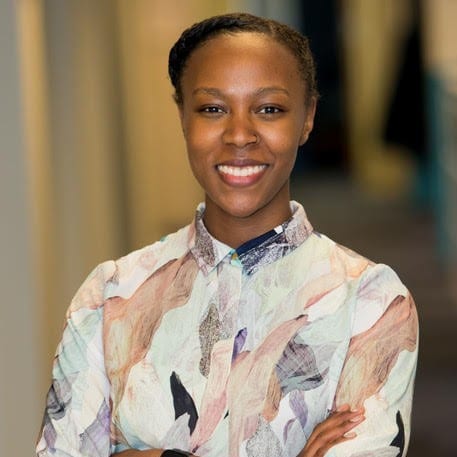 Ebony Davis has always loved reading. Her love of the written word started early and continues today with her book club friends in Chicago. But it was the syllabus from her Rainier Scholars literature classes some fifteen years ago that framed much of what her life is about today. Books like The Bluest Eye by Toni Morrison, The House on Mango Street by Sandra Cisneros, and The Invisible Man by Ralph Ellison got her thinking about race and identity. She says, “I read those books at a time when I was coming into myself; reading about Blackness or being the other was important to me.” As a Black woman, Ebony gained perspective from these books on the challenges she and others like her faced as they made their way through, not only  the educational system, but also  day-to-day life.

After the Academic Enrichment Phase (AEP) at Rainier Scholars, Ebony went to private schools for middle and high school. She attended University of Southern California, where she received a Bachelor of Arts degree in Psychology, followed by Dominican University in Chicago where she received her Master of Science in Education. A self-described observer and naturally introspective person, Ebony understood the cognitive dissonance of being on the inside track of a quality education, but at the same time feeling outside of the social milieu in those schools, always feeling a bit “other.” She says, “Since I was one of the few Black people in my classes, it was important for me to be comfortable with who I am, so I could move more easily between ‘worlds.’ Growing up, I dealt with the being too Black for one crowd or being too White for another, being the poorer one in one group and then the well off in another.”

Ebony gives credit for the resilience of her identity to her large and loving family, her friends and her peers and academic counselors at Rainier Scholars. These were communities –sanctuaries actually– where she could completely relax. “They understood me because they had been through the same things as me. They provided spaces where I could just be, and not have to explain.”

Her maternal grandmother raised seven children on her own and had a childcare business called King’s Daycare which Ebony, as well as most of her cousins, attended as young children. By the time she got to elementary school, Ebony was helping her grandmother at the daycare, something she would do periodically as she grew into adulthood.  These years spent around kids, and her grandmother’s wise care of them sparked Ebony’s interest in psychology and possibly becoming a pediatrician. At USC she chose the pre-med academic track, but in her senior year, she took a class that would change her direction. It was a class on the African Diaspora, covering the history and impact of the mass dispersion of peoples from Africa during the Transatlantic Slave Trades from the 1500’s to the 1800’s. Similar to the early insights garnered from her reading in AEP, what she learned in that class brought into clearer focus what it means to be a Black woman in America and challenged her to keep issues of race and identity front of mind. She graduated in 2015 with a BA in Psychology, still believing she would apply to medical school, but at the same time, she realized she was at a crossroads.

Given her years of experience at King’s Daycare, coupled with time spent tutoring, Ebony thought it made some sense to give teaching a try. She believed in the mission of the Teach for America program (TFA) and its commitment to providing equitable education to students in under-resourced public schools. She applied to TFA, was accepted and moved to Chicago to begin a two year commitment teaching at a PreK-8 school in Chicago. She enjoyed her time with TFA, but after her fourth year of teaching, she became frustrated. “I loved the kids, but not the classroom,” she acknowledged. Some of her misgivings harkened back to her earlier schooling, in particular, the sense of “feeling other.” This time, however, it was attached to the education she was giving to her students. Ebony knew she had enjoyed and benefitted from the richness and freedom of a top-caliber education, but now she felt that the students she was teaching – kids who were like her growing up – were not getting that same freedom to explore, create and make mistakes. The contrast between the privileged and less privileged classrooms was disturbing for her. She had the distinct feeling that, “in early childhood education, especially in high need areas, schools tend to overcompensate for the disparities they feel students will face in the future, taking away some of their autonomy.” In other words, these children were being treated in a way like the Narrator character in Ralph Ellison’s The Invisible Man. They were not seen for who they were, their potential not recognized.

Ebony is no longer teaching, but she still considers herself an educator and advocate for children. She is currently working at CodeHS in Chicago, an innovative company providing curriculum, tools and resources to teachers to help their students learn to code. She is proud to be using her experiences as a teacher to work with schools to implement high quality computer science programs and believes teaching kids coding is yet another way to open their world to new horizons. While the exact details of her future are uncertain, she remains committed to her community and working with Black and Brown children – all of whom deserve to be recognized for their full potential.