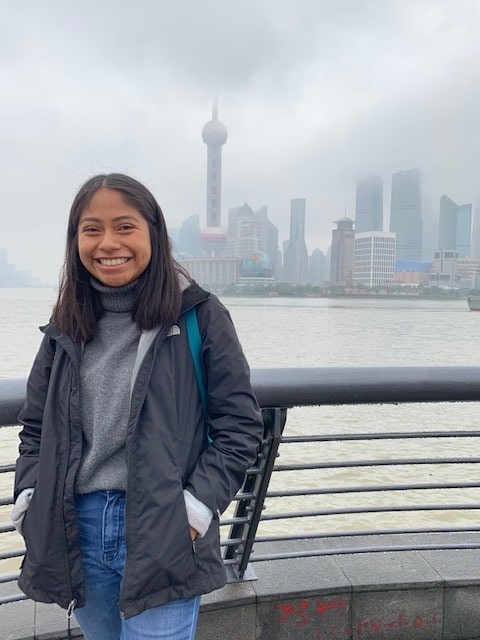 Though she became famous as a novelist, Alice Walker was also a poet, with a book entitled Absolute Trust in the Goodness of the Earth.  Sara Sarmiento-Ruiz first encountered Walker’s poetry in high school. She says Walker was the first poet whose writing reflected how she felt.

Sarmiento-Ruiz, a proud member of Cohort 9, is getting ready to graduate from St. Olaf College, with a dual major in environmental studies and Mandarin Chinese. Though it might be daunting to enter the job market during a global pandemic, she may have absorbed some of the “absolute trust” Walker referred to. Committed to doing meaningful work in service to others, Sarmiento-Ruiz says she sees “no other option than to remain hopeful about the future.”

Hers is a story of hard work and focus embedded in a tapestry of support. There was no time to be shocked by the rigor of Rainier Scholars; she had work to do and college in her future. She’s grateful for the community of supporters and friends she made along the way and is effusive as she names the people she wants to thank – staff members Kaila, Viche, Milena, Asha and Gio. Pari, her student advisor, now in medical school at the University of Washington; Angie, who coached her through her oratory performance and Mr. Little — the most impactful teacher she has ever had.

When she was accepted to St. Olaf, Rainier Scholars Director of College Counseling Derek Rogers and his wife Laura, who was Sarmiento-Ruiz’s college counselor at Forest Ridge High School, bought her two pairs of woolen socks to withstand the Minnesota winters. A first-generation college student, she felt pressure to succeed in college and is grateful for the patient support of her Rainier Scholars advisors that helped carry her through.

A native Spanish speaker with intermediate proficiency in Mandarin Chinese, it’s no accident that Sarmiento-Ruiz speaks the two languages with the most native speakers in the world. “I want to communicate with as many people as possible,” she says. While in college, she studied abroad in China, where she had the privilege of experiencing the culture first-hand. She also traveled to Japan.

Though for most of her life she planned to study medicine, in college, environmental studies caught her eye.

Her first internship was at the Fred Hutchinson Cancer Research Center.

Her next experience, at the Cascadia Consulting Group, which focuses on environmental sustainability, gave her the opportunity to work with different teams on recycling and disposal management, learn about both public and private sector environmental management, as well as to do local community outreach. It was followed by an internship at Forterra, where she was able to build on the skills she learned at Cascadia.

“I always wanted to help people,” she says. “I guess helping the planet is another way of doing that.”

Now, she’s ready to gain professional experience in her field, before eventually attending graduate school, where she’d like to study writing or philosophy.

“Eco-literature and eco-criticism were two of my favorite areas of study, but the writers are predominantly white,” she says. Ever the communicator, Sarmiento-Ruiz thinks that through her writing she can pave the way for people of color to gain visibility and share their own experiences.

“So much injustice has been exacerbated during the pandemic,” she says.

“I’ve always noticed these injustices and how they tie into the environment.  I feel like any work I do in my field will be meaningful.”

As she comes to the end of her formal Rainier Scholars journey, Sarmiento-Ruiz wants to give a shout-out to her fellow graduating seniors from Cohort 9.