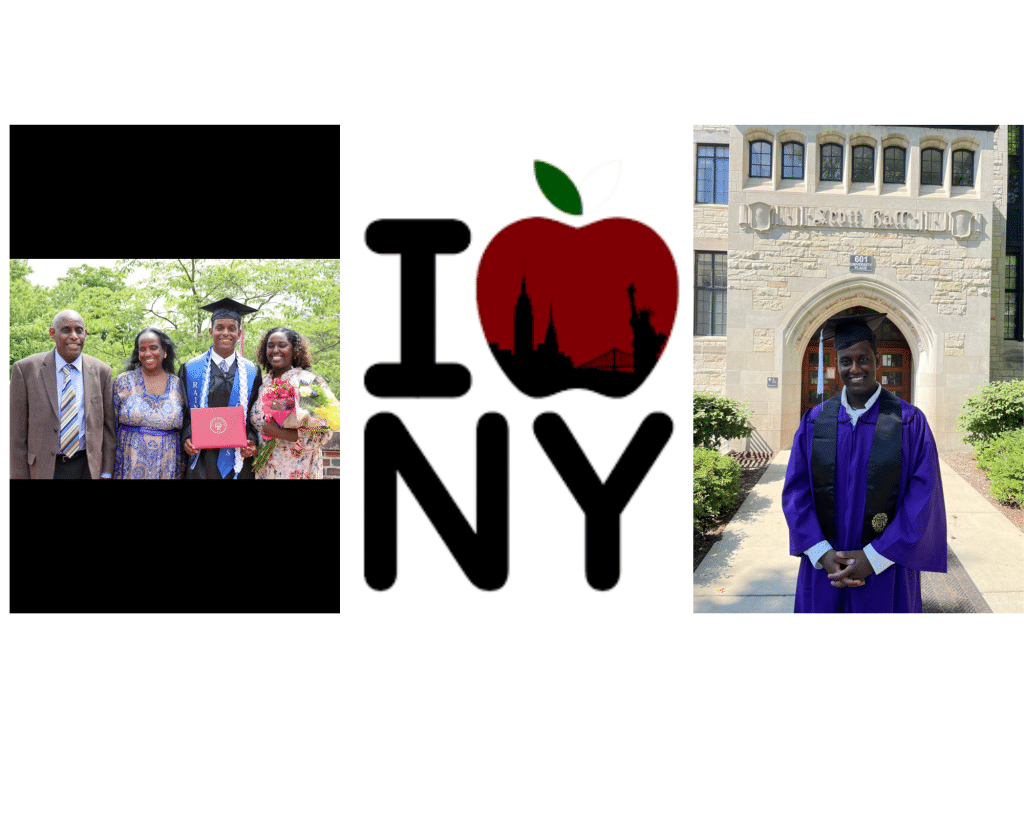 Daniel Ewnetu and Simon Mehari have a lot in common. They both attended Broadview Thompson K-8 in Seattle. They are both members of Rainier Scholars Cohort 9. They both did middle school summer programs – Daniel at Exeter and Simon at Wasatch Academy in Utah. They were both boarding students at Oregon Episcopal School. And now, they are both first-generation college graduates embarking on careers in global finance and living a few blocks away from each other in New York City.

I caught up with them one evening over Zoom, where, like a scene from a movie about young professionals newly arrived in the big city, they sat in sparsely furnished apartments, fresh from on-the-job training, with sirens blaring in the background.

“The past ten years flew by,” says Simon, remarking on the fact that he and Daniel are now Rainier Scholars alumni. He graduated from Denison University with a degree in financial economics and now works at the financial services company Credit Suisse, where he interned his sophomore and junior years of college. He also interned for two summers at Microsoft’s Finance division.

Daniel majored in economics at Northwestern University and now works at Deutsche Bank in the Technology, Media and Telecom Investment group. In addition to interning at Deutsche Bank before being hired as a full-time employee, he also interned at the Investment Office for Bill Gates, Frazier Healthcare Partners and Russell Investments. According to Daniel, life in the Big Apple is busy and there are fewer trees than in Seattle.

Both Daniel and Simon belong to cohorts of new hires at their respective companies, a bonding experience reminiscent of their time commiserating with classmates in AEP. Daniel, who recently reconnected with several members of Cohort 9 at their college graduation celebration, says he’s able to resume conversations with these friends he made at age 11 as if no time had passed.

“The Academic Enrichment phase is a very intensive period, where you learn a lot of things at one time,” he says. “At many points, you have to rationalize that this is only 14 months and I’ll have a great number of opportunities at the end of it. Similarly, these next few years working in finance will be extremely demanding, test us more than we’ve probably ever been tested since AEP, and we must come back at it with the same mindset we had in our fifth-grade summer. This is our time to learn, and we have to make as much of it as possible, because we know what we develop from this experience will lead to even greater opportunities at the end of it.”

“The support I got from everyone at Rainier Scholars played a role in helping me define who I am and who I want to be, as well as helping to develop good study habits,” says Simon. “It might be corny but, though I don’t say these words every day, perseverance, integrity, courage are all things that are so ingrained in my brain at this point.”

Both young professionals are entering into a field that is grappling with a lack of diversity and equity and both acknowledge the steps they see their companies taking to effect change. From more inclusive hiring practices to BIPOC professional networks, employee resource groups and mentorship opportunities, Simon and Daniel are encouraged by the progress they see. They are both ready to step up as mentors for younger scholars contemplating careers in finance.

“Rainier Scholars gave us this gigantic project and a long timerise with many steps – AEP, the summer program, boarding school, internships, college graduation and a job,” says Daniel. “Now, when I wake up each day, it pleases me to know that this path that Rainier Scholars established for me long ago was broken up in such a way that I’m allowed to do what I want to do now. I feel like I understand the framework I must use to approach other large projects in life. It is possible to do something that seems hard by breaking it down into manageable steps and finding people along the way to mentor you.”

“My journey had a lot of self-inflicted hiccups that Rainier Scholars was able to help me move out of and develop me into a more refined scholar and individual,” says Simon. “I’m confident in myself and my capabilities but still sometimes I think, wow, this was a dream I set for myself ten years ago, graduating from college and working in finance. Seeing that progression and seeing it through is surreal, but really satisfying, I still have regulatory exams and a lot of things to finalize, so I don’t want to sound boastful, but I have a lot of pride in myself.”