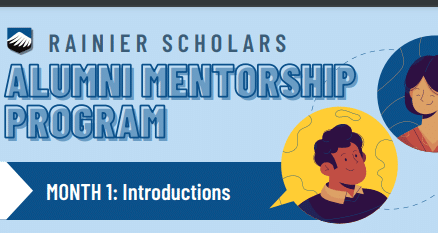 Pamela Biniam was excited, but nervous when she received her interest form. The Wake Forest University sophomore wondered if she would feel comfortable with her “match.” Ela Fessehaye, a sophomore at Howard University, had a “nothing ventured, nothing gained” mentality. As she answered her survey questions, she decided to be honest about her long-term goals, versus what might be expected of her, and to be open to opportunities she might previously have been closed off to.

Two months later, these two Cohort 12 college scholars are chatting easily with their Rainier Scholars alumni matches. Pamela is paired with Jomeka Bland, a Cohort 2 alum now working in recruitment at Salesforce in Atlanta. Ela is matched with Maggie Khuu, a Cohort 1 alum now pursuing a PhD at the University of Connecticut, focused on researching the regulatory effects of cells in the lateral hypothalamus. They are all part of an inaugural mentorship program that pairs current college scholars with alumni on established career paths. It’s just one more web in Rainier Scholars’ intentional network of support.

The Alumni Mentorship program is the brainchild of Career Programs Manager Steph Salazar and Marketing and Communications Manager Erika Quan. A previous program that paired college students in conversation with career professionals had been dormant. The Career Development team wanted to revive it but wondered if there was now an opportunity to engage members of the Rainier Scholars alumni community.

In the initiative’s discovery phase, Salazar researched existing mentorship programs and the duo met with the Rainier Scholars Alumni Council to gauge interest, and with the Academic Counseling and Career Development teams to assess what sorts of support would be most valuable. The Rainier Scholars Career Development team also reached out to college scholars to see who would be willing to participate.

While Salazar started creating a handbook and an interest form, Quan built a monthly newsletter template and researched topics to be featured over the 11 months of the program.

The result: the Rainier Scholars Mentorship program launched in late September with 26 pairs of mentors and mentees, a number that exceeded Salazar’s and Quan’s expectations.

The value of shared experiences

Maggie Khuu graduated from Middlebury College. An early internship opportunity with UW Medicine’s Neurological Surgery Summer Student Program, which she found via Rainier Scholars, determined her current career path. She returned to the lab for several years, followed the principal investigator to help start up a new lab at the University of Chicago, and, at his recommendation, entered her current PhD program. An early Alumni Council leader, she says a program like this was something she and her peers dreamed about. Now that the Rainier Scholars alumni community is 277 strong, she’s thrilled to see that dream turn into reality. Ela, her mentee, is majoring in radiation therapy and has benefited from Maggie’s experience in the medical field.

“I love Rainier Scholars and I love giving back to the program any way that I can,” says Jomeka Bland, who graduated from Agnes Scott College. After leaving a job in Seattle, through a Rainier Scholars connection, she landed her first job in Atlanta and went on to work for Deloitte and EY before moving over to Salesforce, where she is a strategist helping bring diverse talent to the company. “I never had a mentor and I’ve been through a lot as a Black woman in college and in corporate America. I know what it’s like to navigate those spaces alone and I wanted to support another BIPOC student and be their ally.”

All four of these program participants agreed on two things that made them comfortable: shared experience and trust. “Rainier Scholars has always put me in touch with people who are thoughtful and considerate,” says Ela.  Adds Pamela, “It’s helpful to have someone who gets my experience and who I don’t have to explain myself to. I know I can text my mentor Jomeka whenever I need to.”

A lifelong network of support

Rainier Scholars alumni and staff envision a lifelong connection to the program which fosters a network of Rainier Scholars career professionals who support and mentor one another. Knowing there are guides on the road ahead is already proving to be a comfort to college students.

“Before each meeting with Jomeka I’ve had a constant level of anxiety around things I should be doing to prepare myself for after college,” says Pamela. “After every meeting with her I feel more grounded and am reminded that I do have support.” Though Maggie reminds her that there is “plenty of time to grow,” Ela has already benefited from Maggie’s resume guidance, as she contemplates a career in the medical field.

“I’ve learned at Rainier Scholars that there is support at every single level and people want to look out for each other,” says Ela. “As much as degrees and education are important, I’ve also realized how far personal connections can take you.”

“Taking advantage of support is not a selfish thing,” says Pamela. “You can never have too much support.”