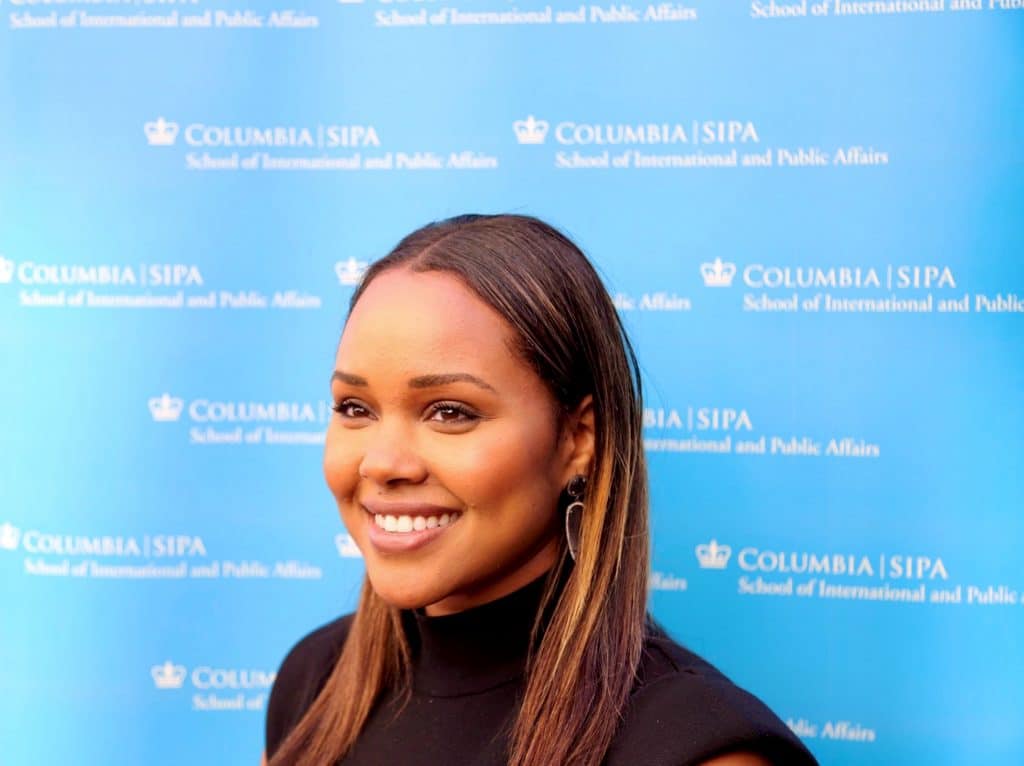 It’s a long way from Eritrea to New York and the steps along Lily Ghebrai’s journey included Dallas, Seattle, and Vermont. The eldest daughter of immigrant parents who dreamed of a better life for their children, powered by education, Lily is now ready to come full circle, embarking on a career she hopes will enable her to contribute to economic and political stability in her homeland and beyond.

She’s about to receive a Master’s Degree in public administration from Columbia University’s School of International and Public Affairs (SIPA). Building on her undergraduate degree in international politics and economics as well as experience working on political risk analysis, at Columbia, Lily is studying economic and political development with a focus on data analytics and quantitative analysis, so she can understand how to leverage big data to forecast political, economic, and environmental shocks.

“When my family received the letter inviting us to a Rainier Scholars information session nearly 20 years ago, it felt too good to be true,” says Lily. “Education was the reason we came to America. When my father, Fitsum, heard Rainier Scholars founder Bob Hurlbut talk about a program that helped kids go to college, he knew we could not miss this opportunity. He signed me up then and there.”

Though she admits that Rainier Scholars was one of the hardest things she’s ever done, for Lily, quitting was not an option. “The Academic Enrichment Phase was grueling,” she says. “I remember my parents picking me up on Wednesdays after school. I cried in the car and scrambled to finish my schoolwork and eat a snack before going to Rainier Scholars. My parents always said, ‘Lily, this is all going to be worth it.’ Fast forward, I ended up getting into The Lakeside School on a full scholarship and later got into Middlebury College, where I received an amazing education and had the opportunity to study abroad in Paris and hone my language skills.”

As one of few students of color, navigating elite school environments at Lakeside and Middlebury was a “huge culture shock,” says Lily. She had a lot in common with her Rainier Scholars friends yet felt like an outsider at Lakeside. “I remember being 12-years-old, stepping foot on Lakeside’s campus and immediately feeling like I didn’t fit in,” she says. “I didn’t have a designer wardrobe. My parents didn’t drive luxury vehicles or work at Fortune 500 companies. In fact, at the time, my parents owned a small 7/11 convenience store and drove a Toyota Sienna. But we were still proud. My mother, Almaz, also did a great job in reassuring me that I did belong. In fact, the only thing that gave me comfort at the time was knowing I was very bright and was excelling academically. That is how I knew I belonged there.”

“My first day at Middlebury was my first day on the East Coast,” Lily says. The discomfort she felt from lack of representation, extreme displays of wealth and the cultural divide between wealthy students and residents of the nearby town was exacerbated by the remote campus. Yet Lily formed lasting relationships. “The sense of community that is cultivated at these tiny schools in the middle of nowhere is strong,” she says. “I made the best friends at Middlebury. I formed close relationships, not just with students, but also with service staff. As an immigrant, whose family had worked similar jobs to survive, I could relate to them. I remain very close with my Middlebury economics professor, Leticia, who graciously offered me a room free of charge while I’m in grad school in New York. I wouldn’t have traded my Middlebury experience for anything.”

Thanks to her Middlebury network, Lily found her first job, at Eurasia Group, where she worked on political risk analysis for three years. She moved on to GeoQuant, a political risk technology firm, which relies on data to make political predictions.

“At GeoQuant, I was no longer tasked with doing the political risk analysis; it was being done by computers. Those who could engage with the computer had sophisticated quantitative skills. In many ways, I felt excluded from the conversation and that’s something that has never sat well with me, even as a little kid. I wanted to know what was being talked about. I wanted to be present at the table. I wanted to have a voice. Even if I felt like I didn’t belong, I was going to find a way to make a meaningful contribution.

“Conversations about big data piqued my interest – how to quantify a qualitative discipline. I became interested in predictive analytics and use cases for other things, such as economic development in the Global South, in countries like Eritrea. That was one of my motivations for applying to SIPA, rather than other policy schools. SIPA is known as the most quantitative.”

As part of her school program, Lily has been working as a Public Policy intern at Amazon. As she prepares to graduate this spring, she is taking the long view of what she hopes to accomplish and is reflective about the support and values that have helped shape her.

“In 20 years, I hope to have made a significant difference in conflict resolution and capacity building after conflicts in the Horn of Africa and Eritrea. I’m also interested in peacekeeping and peacemaking, as well as economic and political development. A lot of the countries I’m interested in are former colonies in the Global South. They are victims of resource exploitation and are still dealing with the residual impacts of arbitrary demarcations split across ethnic lines, which contributes to ethnic and religious tension. Many of these countries are heavily indebted to Western countries and are victims of huge geopolitical power imbalances.  All of these issues need a lot of work.

“The Rainier Scholars values of Excellence, Perseverance, Integrity, and Courage (EPIC) have helped steer me professionally and personally,” says Lily. “Throughout my academic and professional career, I’ve always faced challenges – whether it’s imposter syndrome, sexism, racism, or a professional challenge that creates self-doubt. I revert to those values as my compass.

“Rainier Scholars helped me dream bigger and expanded my world view, showing me that there was so much more out there for me than my little Seattle enclave. I was exposed to brilliant, highly educated people of color, and they all believed in me, taking time out of their lives to invest in me. I thought, ‘if they believe I can do it, if there’s a whole program centered around kids like me making it, I must be worth a damn, and I can probably do this.’ It gave me confidence and kept me disciplined.

“Rainier Scholars changed the trajectory of my life, it changed my family’s life, and it will change the lives of my future children. I’m grateful to my parents for having the faith to believe Bob and for encouraging me to stick with Rainier Scholars, even when I struggled. And I’m grateful to have such strong Eritrean and Christian values which continue to guide me in every aspect of life.

“Bob always says, ‘there’s no doubt that with the momentum you were exhibiting at such a young age you would have gone to college,’ but I don’t know if that’s true.  Psychological limitations are prevalent among immigrants and people from impoverished socio-economic backgrounds, which impacts their ability to dream.

“I never felt I could squander the opportunity. I had to give it my best shot. That same mentality sticks with me today in everything I do.”